As the week, I feel, so the summer. How can it be almost gone? Nevertheless it’s Saturday —and yesterday’s weather was a good taste of things to come. The weatherman has predicted rain for today, but rain in harvest is odious, so none of us will mind at all if it doesn’t come.

There are still a few hummingbirds with us; I saw two, possibly three, off and on yesterday. Last night I actually brought the juice inside so it wouldn’t be so cold for the tiny creatures if they came — spoiling them, I guess.

I waited until after dark to take down the feeder, but while I was still on the deck, two steps up from the ground, I noticed — a hummingbird?? — gathering nectar from the flowers in the three tubs just below me. I watched it zip from flower to flower, coming within a few feet of where I stood. I was rather dumbfounded to see a hummer foraging in the dark. Poor thing must be starving to be so bold!

The tiny bird, not much bigger than a dragonfly, whizzed among the petunia blossoms quite unmindful of my presence so I stepped down and took a better look. I’ve never before seen a hummingbird this small — nor noticed the cross-wise stripes on its back. Almost like a wasp. Wait a minute! This just can’t be a hummer!

So I called my husband to come see this odd creature, which zipped around us a few times as we stood there, then went back to the flower pots. Our cats were outside now, too, and it zipped almost by their noses. I had to chase Pookie away or he would have caught the clueless thing! Bob got a fair look, too, as it slurped nectar from the petunias and said it must be a moth of some kind.

So I Googled, “moth that looks like a hummingbird” and there really is such a thing: a hummingbird hawk moth. This photo from a Bug Guide post shows the exact creature. 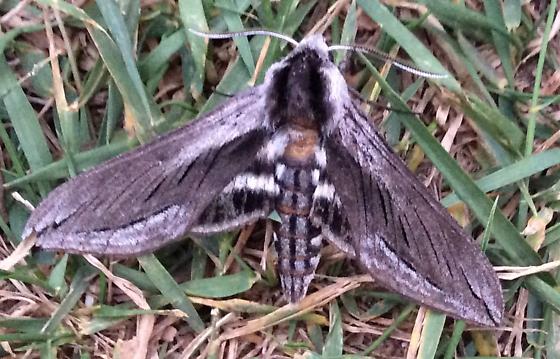 Learn something new every day! Here’s another article about it.

This morning I put out the juice again and an adult female hummer was at the feeder at 6am. I think the little guys have been gone for a few days already. How much longer until they’re all gone?

I wonder how you all will be spending your day, and this weekend? Not weekend-at-the-lake weather here; rather, this would be a good day to bake and warm up the house with oven scents. I’m still keying in my misc scribblings and other clipped-out items I’ve saved over the years. I’ve finally decided there’s nothing intrinsically sacred about the words, though; I can toss the poems that aren’t that great. Ditto with my own writing. I’ve been telling myself, “One of these days I’m going to polish all these writings.” Time to face the music.

Here’s one little “thought” I wrote a few years back, in the midst of another decluttering effort.

A lifetime of knickknacks:
souvenirs, gifts from friends,
inherited from elderly aunts.
The accumulation filled
her space. There was barely room
for the stretcher when she died
while rearranging her stuff.

Have a nice weekend, everyone!