For example: a mouse or rabbit, in hirsute, dashed away from a fox or cat in pursuit.

In the case of male and female, the chased might wish to remain chaste, with the pursuer being the wooer. His pursuit was about pressing his suit (figuratively speaking) and she was all a-flurry in her hurry to outdistance his advances. (Pardon all my puns! I have this weakness. 😉 )

As you’ve likely discovered yourself, all good ignorance comes to an end at some point. I came across the word one day where my definition didn’t make any sense so I finally looked up the word, and learned that I’d been pursuing the wrong meaning. Not quite, though: the mouse and rabbit were hirsute (hairy) — but so were the fox and cat.

Knowing the word’s real meaning now, I can see that sheep are the perfect example of hirsute. And Pixabay provides me with this perfect illustration:

Sheep are one of the few animals from which man can fashion his own apparel without killing the supply. By caring for and then shearing the sheep, carding, spinning, and weaving the wool into fabric, we’ve developed a mutually beneficial relationship with the docile creatures.

Philip Keller, in his book A Shepherd Looks at PSALM 23, talks about a problem unique to sheep, one that a shepherd must be ever on guard against: a sheep being cast down. A sheep with a heavy fleece, especially a ewe made even heavier with the lamb or twin lambs she’s carrying, may lay down and, trying to arise later, lose her balance. Then the animal can’t right itself. Old English shepherds called this “a cast down sheep” or “a cast sheep.”

The sheep will lie there terrified, feet flailing in the air as it frantically tries to right itself, until the shepherd comes to its rescue. Or until a predator finds it. Or until the gasses in its stomach build up and suffocate the sheep. Bad enough to lose a sheep, but losing an ewe means losing the lamb(s) she’s carrying and the income they’d bring.

No, a cast sheep is never a good scenario — except to a passing wolf. And we don’t want to go there.

Sheep were designed to be with man; in so many ways they need a shepherd. And man has used the hirsute quality of sheep to keep himself alive on frigid nights. A neat working relationship. 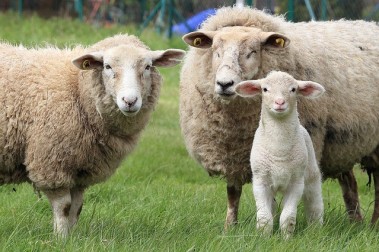 And with sheep for sure there’s no pursuit in hirsute. They come when the shepherd calls.