The Word of the Day Challenge yesterday was IMPRESSIONABLE — and I missed it. I had a nice response figured out, too, but we took a trip to Moose Jaw to visit relatives and I didn’t have time to post it. Oh, well…my thoughts will keep for another day.

A fog blanketed the land yesterday morning when we started out, rather unusual considering how dry it’s been, but after an hour or so we were able to leave it behind us and enjoyed lovely warm sunshine for the rest of our trip. We had lunch with my sister, then stopped at the Public Library, and later visited with Bob’s cousin and wife. A good day!

The Word of the Day prompt this morning is: MEPHISTOPHALIAN

A huge word I will never have much use for, especially seeing it’s fictitious. Nevertheless, a bit of education never hurts, so I looked it up in Merriam-Webster online. Their definition:
Mephistophelian:
– of, or pertaining to, Mephistopheles
– wicked; fiendish
Mephistopheles:
– a chief devil in the Faust legend from the 1500s
Faust:
– a magician of German legend who enters into a compact with the devil
Faustian:
– of, relating to, resembling, or suggesting Faust
– especially: made or done for present gain without regard for future cost or consequences

Though I’ve never heard the word before, I’m too familiar with the concept. I’m sure every human being has been guilty at one time or another of doing something for present gain regardless of future consequences. For example, so-called little white lies get you off the hook at the moment, but you’re in for it when the person finds out the truth.

When you look up a word with Merriam-Webster, they kindly give you a list of several other words listed before and after the one you’ve looked up. Curious, I clicked on two of those other words, and discovered:

MEPHITIC:
– having a foul odor
MEPHITINE:
– of, or relating to… 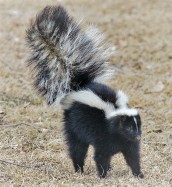 Bingo! Now here are words I can throw into a conversation from time to time, because we have seen indications of mephitine activity around our property.

If I get a whiff of skunk, now I can say, “There’s a mephitic odor lingering about our yard this morning.”
Or, “There’s evidence of mephitine harrassment in the night. Some predator got a deterrent drench.”
Or maybe, “Judging from the mephitine vapour wafting over the road, Monsieur Moufette has met his Waterloo.”
(Mind you, “met his Waterloo” has likely been branded as a cliché, along with “bit the dust.” I think “He’s toast” is still acceptable.)
But if I did make such high-brow statements, most of my friends would ask for a translation. So I might as well say that someone hit a skunk on the road last night.

Perhaps a person could put up a sign?
WARNING:
To all who wander around in the twilight bent on mischief. There is a risk of annoying one of the crepuscular creatures that pass through this yard. If you do, you may well receive a severe mephitine drenching.
(Squeezing in the RAGTAG daily prompt for today: DRENCH)

That ought to make tricksters think twice.