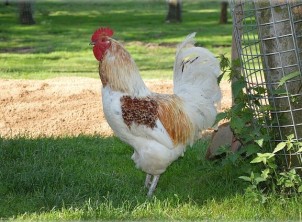 See that handsome young rooster over there. That’s Firecracker. Raised him from a chick, I did, fed him, fussed over him, gave him lots of TLC so he’d be nice and plump come fall.

He was a cute little guy back then, especially when he started following me around the yard. I’ll admit, I’m going to miss having him tagging along after me, but now that he’s full grown, he’s going to be the star of our Thanksgiving table.

He wasn’t very old when the grandchildren named him Firecracker — and we thought it was kind of a cute name, so it stuck. I’ll tell you why he got that name. Oh, yes, he can make enough noise when he wants to, like at 5am when you’re wanting another hour of sleep. But you should hear him explode when he catches sight of a mouse or rat around the chicken yard. One day the grandchildren were in the yard fussing over him like they do, when he spied a mouse in the grass nearby. They said he went off just like a firecracker and went dashing over to do battle.

He’s been really good that way. Every time he sees a rodent he goes after the thing, calling all his ladies to come help him. He has a certain kind of squawk that says, “Enemy spotted!” and the hens come running. Our dog, Duchess, dashes into the action, too, when she hears that sound. Between them all, they make short work of rodents. I’m thinking poor Duchess will miss Firecracker. The hens will, for sure, but he belongs on our Thanksgiving table.

One thing I’m happy about is how good Firecracker is with the grandchildren when they come over — maybe because they’ve fed him grain and other tidbits ever since he was just a spring chick. Roosters can sometimes be cantankerous, but not him. You know how kids are. As soon as they get here, they rush out to see Firecracker and he usually comes running when he hears their voices, to see what treats they might have for him.

When I told the youngest grandchild last week that Firecracker is going to be our Thanksgiving dinner she got all sober and sad-looking for awhile. I probably shouldn’t have said anything. I guess they’re all going to miss seeing him around after next week.

One of the grandsons must have heard the news, too, because he phoned a few days ago specially to ask if I was really going to cook Firecracker for Thanksgiving.

“Of course we are,” replied. “We won’t eat him raw.” A gulp at the end of the line told me he hadn’t appreciated my little joke. So I explained that Firecracker has had a good life and now it’s time to say goodbye, because he belongs on our Thanksgiving table. That’s what we raised him for.

I’ve got the bread cubed and in the freezer for the stuffing. Next Tuesday my husband’s going to dispatch Firecracker. I’ll tell you, plucking that bird is going to be hard. Oh, hang on a minute…my phone’s ringing. I see my son is calling.

“Hi, Jason. How are things going? Glad to hear it. By the way, I wanted to let you know we’re planning to have our Thanksgiving dinner at 5pm this time… What do you mean, you’re not coming? … Are you saying NONE of you are coming? … But why? I have this huge meal planned… Your kids are all refusing to eat Firecracker? … But he belongs in our Thanksgiving meal. What am I supposed to do with him if… What!?”

Doesn’t that beat all! The grandchildren have emptied their piggy banks and say they want to buy Firecracker. They want to keep him as a pet, of all things, and we can just let him live here. And the family is offering to bring fish for the meal. Jason says none of them know any fish.

Oh, well. Anything for the grandkids, right? The hens will be more content having a rooster around the place, too. And Duchess will be happy if Firecracker stays around, seeing she’s grown so fond of him.

I’m not especially sentimental, but I have, too, if truth be told. 🙂