To An Old Friend

by Edgar A. Guest

When we have lived our little lives
and wandered all their byways through,
when we’ve seen all that we shall see
and finished all that we must do,

when we shall take one backward look
off yonder where our journey ends,
I pray that you shall be as glad as I
shall be that we were friends.

Time was we started out to find
the treasures and the joys of life;
we sought them in the land of gold
through many days of bitter strife.

When we were young we yearned for fame;
in search of joy we went afar,
only to learn how very cold
and distant all the strangers are.

When we have met all we shall meet
and know what destiny has planned,
I shall rejoice in that last hour that I
have known your friendly hand.

I shall go singing down the way
off yonder as my sun descends
as one who’s had a happy life,
made glorious by the best of friends.

I came across this quote awhile ago and it gave me a chuckle:

I wanted to share this neat quote with you this morning but couldn’t think of a proper title for my post — until I spotted one of the “Our Daily Bread” devotional booklets I keep around for quick inspiration.

The title, “Our Daily Bread”, is taken from The Lord’s Prayer. Responding to his disciples request, “Teach us to pray,” Jesus gave them a sample prayer. (Matthew 6:9-13) Included in this is the phrase, “Give us this day our daily bread, and forgive us our trespasses (or debts)…”

I know the whole phrase is asking God to meet our needs of the day, but this morning the words really impressed me: “Give us this day…” A great title for my post!

I wouldn’t want to miss this day — or any day. Time goes by fast enough. Also, I hope to make good use of today. It’s my hope and prayer that I can accomplish some goals, and also enjoy today’s hours. Yesterday I finished the final edit (I hope!) on the manuscript I’ve been working on and put it together as a pdf, ready  to send to proof-readers. Today I plan to deal with some of my own work that’s been piling up while I gave most of my attention to this project.

Oodles of poets have written about living in today, dealing with today’s problems, enjoying this time. They remind us that we shouldn’t rush through these hours, but stop to smell the roses blooming today, and store up some of today’s goodness and/or good memories for our future days.

Here are two verses from Annie Johnson Flint’s poem, One Day At A Time

Not yesterday’s load we are called on to bear,
Nor the morrow’s uncertain and shadowy care;
Why should we look forward or back with dismay?
Our needs, as our mercies, are but for the day.

One day at a time, and the day is His day;
He hath numbered its hours, though they haste or delay.
His grace is sufficient; we walk not alone;
As the day, so the strength that He giveth His own.

Everyone envies
my flexible vision,
my unique sparkling hat
perched atop my healthy
yellow complexion.
I blush green over
all their compliments.

Then down I swim
into the depths where
I play hide and seek
with the urchins
in a world you only dream
of visiting someday.

My response to today’s Word of the Day prompt: UNIQUE

Over the Christmas holidays I discovered a new series and have been reading through them one after the other. This is the Markham Sisters series by Diana Xarissa, who also does the Aunt Bessie (An Isle of Man Cozy Mystery) series.

The Markham sisters are two retired teachers who spend their little inheritance windfall on a bed & breakfast in what they think will be a calm little English village. Which it is, for the most part; the locals do their best to make the sisters welcome. The constable drops in often just to check on them—and is easily persuaded to stay for a bite to eat, seeing what a great cook Joan is.

Owning a bed & breakfast has been Joan’s dream since she was young, and since she’s the older, she’s persuaded younger sister Janet to go along with the plan. But running a business and dealing with customers sometimes proves intriguing. Joan has a stronger sense of propriety — which means “no snooping.” It’s Janet who gets quite curious about people who are acting suspiciously or whose stories don’t add up. Joan tells her to mind her own business, but Janet can’t resist doing some investigating.

This series is quite tame, more along the lines of Nancy Drew mysteries. Just what I like: no dead bodies discovered, but smaller crimes like art fraud, an odd shortage of narcotics at the drug store, counterfeit money being passed, and people who aren’t who they claim to be. The novel “cases” are named alphabetically and each book is a short, easy read.

There are ordinary day-to-day details some might find rather boring, but I enjoy the setting and characters. I’d take away one star, though, for the way the sisters interact sometimes. They are in their 60s but Joan is still bossing Janet like a teen older sister — at times this seems overplayed. And Janet, when she’s miffed, still sticks her tongue out behind Joan’s back. I’d think if they’ve lived together all their lives they’d have developed more of a respect for each other, show more of an accepting, “live-and-let-live” attitude. (Mind you, I’ve never lived with a sister for years, so I can’t say what roles they might fall into.)

There is a certain “ghost” angle written into these tales that, for my part, could have been left out. In the stories I’ve read so far it’s only been references to sounds Janet hears and occasionally a strange wind slamming a door.

Anyway, I’d give this series four stars. I read each book separately, but I see the author has published collections now, available free to those of you who have Kindle Unlimited. Here are first four cases: 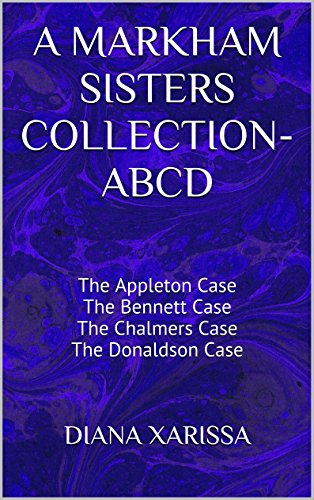 I’m taking a break from editing this morning and feel inspired by the thought of furrows and wind, so I’ll offer this response:

The everlasting wind
sweeps over the furrowed fields
brushing the topsoil
—what’s left of it —
into the grooves
left by the plough last fall
before the farmer —
weary of everlasting wind,
of watching the snowless fields drift,
— left for good.

I’ve heard enough about the “dustbowl years”
that they blow through my writing at times. 🙂