If you want to read a really great book, Dan Walsh’s The Deepest Waters is free as a special promo for a couple of days on Amazon. Here’s the Amazon.com link. 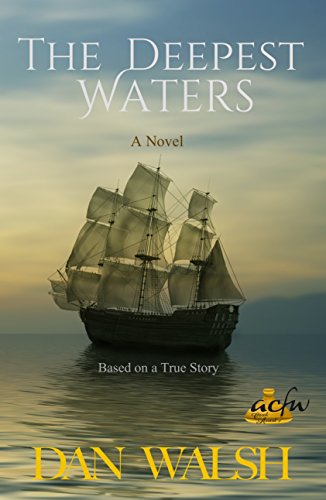 In 1857 newlyweds John and Laura Foster sail from San Fransisco en route to New York, where John intends to introduce his beautiful bride to his family. He sent a letter informing them of his arrival, but they have no knowledge of his recent marriage. Nor has he informed Laura of that fact, thinking it will be only a short time he can introduce them all and they’ll be so impressed with his wife that his strained relations will be soothed and they’ll welcome the couple.

When the ship founders and death seems certain, the couple hold hands and prepare for the end. However, the women and children are rescued from the sinking ship and taken to New York where, after a letter from his “prodigal brother”, Joel Foster is expecting John’s ship to dock. He’s shocked to hear that the ship sank and bears the sad news to the family.

It takes several days for the rescue ship to reach port and Walsh has woven some intriguing episodes into this period. The story cuts periodically to John, after their ship sinks and the survivors are clinging to debris, keeping themselves alive and hopeful of rescue as best they can.

Sadly, a watchful, thieving crewman on the rescue ship spies all the pouches of San Fransisco gold the women are carrying and before they reach port he relieves the naive women of their little money pouches. Thus Laura finds herself penniless in a strange city and facing a family that know nothing about her. Of course they suspect her of being an impostor, as John had all the legal proof of their marriage and their trunk of wedding gifts, with him when the ship went down.

This really is a compelling tale, well told, with vivid and believable characters and a Christian perspective.