Last week’s Crimson Creative Challenge was the picture of an old bridge with a tunnel underneath. See it Here. I wrote this story in my head, but only now have I got it in a proper file.

It’s a modern romantic tale — a bit silly perhaps. Sadly, it violates Crimson’s 150-word limit by almost 600 words, so I’m going to use a different picture and post it as my response to today’s Word of the Day prompt: CAREFUL. Nevin’s plans were carefully made, but he didn’t factor in one little unknown that made all the difference. 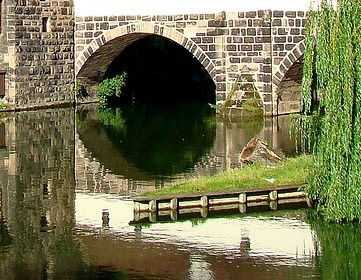 THE TUNNEL OF LOVE

“Here we are.” Nevin and Wendy got out of the car. “Let’s get us one of those paddle boats and sail away.”

Ten more minutes, he thought, smiling. Everything’s set up and the operation will be in full swing before she catches on.

But Wendy had stopped and was staring toward the dark opening. “Umm… Is that the tunnel you want to go through? It’s so…dark.”

“That’s the idea, sweetheart. Couples do a little smooching in the shadows before they come out the other side.” He kissed her cheek. “And I’ll be right beside you.” He took her hand and tugged her toward the paddle boat rentals.

Nevin raised his brows in surprise. “Why? You’re not scared of the dark, are you?”

“No. It’s just that when we were children my brother and I explored a cave one day. We didn’t know bats were roosting in it and our light scared them.” She shuddered. “We were so terrified. All those bats flying around us…and that awful squeaking. I’ll never forget it.”

“But there’s nothing to be scared of here. You can believe the River Council won’t allow any bats to roost in their tunnel. Come on. You’ll like it inside.”

They walked closer to the tunnel’s mouth and Wendy peered in, just as several high-pitched squeals drifted out of the tunnel. “Ack,” she shrieked and jumped back.

Nevin groaned. What’s he doing in there anyway? Tuning the thing? I’m gonna have some sharp words for him about his rotten timing.

Wendy was clinging to him now. “I’m sorry, Nev. I just can’t go in there.” The desperate note in her voice tugged at his heart.

Nevin pictured his careful plans sailing south. “Okay, I don’t want to force you to do something that terrifies you. You go back to the car, Wendy. I have to make a phone call.”

He pulled out his cellular as Wendy walked back to the parking lot alone, probably still thinking about bats. He kicked at a protruding cobblestone. Bats. Rats! Once he knew she’d be out of hearing, he dialed and waited for Cole to answer.

“Plans blew up,” he said. “Who knew she’d be scared of dark tunnels. And bats.” Nevin gritted his teeth. “It didn’t help that she heard some squeaks from the tunnel at the worst possible moment.”

Nevin blew out a sigh. “Yes, you’ll still get paid. We’ll work something else out.” He ended the call, shoved his phone back in his pocket and headed for the car.

“Who knew,” Cole grumbled, replacing his violin back in its case. He brushed the strings lovingly before closing the lid.

“Women!” He yanked at the balloon strings he’d wrapped around a loose stone. And what was he supposed to do with these? The neighbour kids would probably like some balloons. They wouldn’t care about the writing… But they couldn’t be left floating around; he’d best just pop them.

He frowned when several strings pulled loose. Before he could grab them again, a capricious breeze swept the two bobbing balloons out of the tunnel. Cole shrugged and took a better hold on the others. Picking up his violin, he headed out the other exit.

“Look, Nev!” Wendy, standing beside the car, pointed. “Those balloons just blew out of the tunnel! Hey, there’s even some writing on them.”

Nevin slapped his forehead. He was so going to have words with Cole. Maybe I’ll only pay him half what he asked for.

If the breeze would at least move the things away, but no. The balloons dipped down and bobbed toward them; now Wendy was racing to catch one. Talk about the best laid plans going awry.

She succeeded in grabbing the end of a dangling string. “It says… Oooooh,” she squealed. “It says, ‘I love you Wendy. Please marry me’.” She turned to him with a huge grin. “Oh, Nevin, you’re so romantic!”

“At least I was trying to be,” he replied. “Things didn’t work out as planned.”

“Oh. You had these in the tunnel…and I spoiled it. But these balloons popped out at just the right time. And my answer is yes!” She flung herself into his arms. “I would be delighted to marry you.”

He grinned and wrapped her in a tight hug. “Then we have a perfect ending.”

5 thoughts on “He Had It All Planned”