The Ragtag Daily Prompt this morning was BRAVADO

A word that took my mind back to a comment a smoker once made. I think I’d asked him if he ever tried quitting and he assured me, “I can quit anytime I want. I just don’t want to.”

In this particular case, he may have been truthful; maybe he wasn’t addicted to the nicotine and could quit whenever he chose to do so. But I’ve heard this same thought from different ones and it seems mostly bravado. The “I don’t want to” has a lot of fear of failure embedded in it. 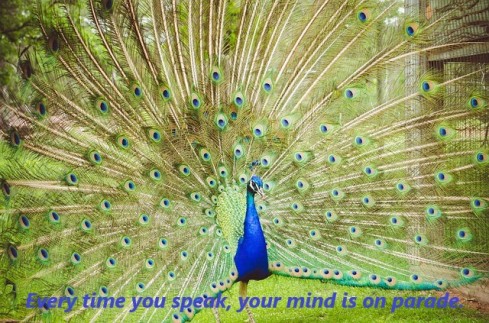 Bravado is a bold statement or manner done for show, bragging not backed up by true courage. A pretense of bravery.

Bold ones may say, “I can fight the lion and I’ll easily win,” when the lion isn’t roaring in their face and clawing at them. But if a lion were to actually savage them a bit, they’d disappear ASAP.

Like the boy I overheard bragging about how he could make a fancy dive off the high diving board at the pool. He dared one girl to do it and she executed a beautiful dive, doing a complete flip on the way down. But when it was his turn, he found some reason to avoid showing what he could do.

New Year’s resolutions often have a bit of this bravado in their makeup. People say, “This year I’m going to lose ten pounds, give up —, work out twice a week, or whatever.” But when the time comes — a craving hits, it’s time to go to the gym — the roaring lion isn’t so easily defeated after all.

Real determination, the kind that faces the challenge and wins, doesn’t usually bluster. Determined souls admit that the battle will be hard, sweaty, and laced with pain, and there’s no turning back. They grit their teeth and firmly say “I will do this if it kills me.”

And from the testimonies I’ve heard from ex-substance abusers, I gather it just about does.