Calm Before the Storm
by Janice L Dick 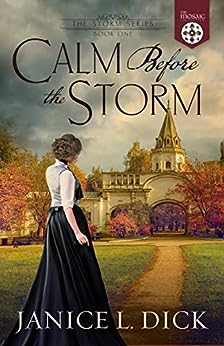 If you enjoy historical fiction set in Europe, here’s a compelling story for you that’s well written and well researched. Exciting, at times quite tense, this is the story of a Christian family living through the turbulent times of the Russian Revolution.

In the 1700s Catherine the Great, Empress of Russia, invited an number of German religious groups to move in and establish themselves in the fertile farmland of the Ukraine and they were doing well for themselves. The Russian serfs had been freed some time before this story begins, but they received no land or help from their government and had to survive however they could.

As the 1900s began, severe poverty and hunger had made the peasants desperate. The government of Tzar Nicholas was imploding, a political cyclone was stirring, and some of the Russian peasants were starting to look resentfully at the prosperous German communities around them.

The Hildebrandts were one of many families in the prosperous Mennonite communities. Heinrich, the widowed father, sixteen-year-old Katarina, the beautiful fourteen-year old Mika, her mentally unbalanced brother Peter, and the two youngest siblings Anna and Kolya (Nicholai) were enjoying the good life on a beautiful estate, scarcely touched by the winds of change until the Great War started.

Entwined with their story is the experience of Johann Sudermann, hired to tutor the younger children, enthralled by the lovely but super-efficient Mika. Though the Mennonites had been granted exemption from the army when they first settled in Russia, soon after the war begins all conscientious objectors must report to work camps. Johann and many others were sent to the medical corps to care for wounded soldiers however they could. The Russian army was so overwhelmed and under-equipped that defeat was inevitable.

We also get cameos of Johann’s childhood Russian friend, Paul Tekanin, as he goes to St Petersburg and joins the Bolsheviks in their plan to overthrow the Tzar. Excerpts from his life give readers a picture of the deplorable state of affairs in St Petersburg before the Revolution, with the mad monk Rasputin pulling the strings.

I’m impressed with how well the author has researched the historical background for this story and interweaves it with an accurate account of day-to-day life in the Mennonite community at that time. Together with the Hildebrandt family readers can experience the joys of prosperity, the fear of a looming collapse of government, the immediate effects of war, and their faith that God will bring them through, come what may.