I came across this quote awhile ago and it gave me a chuckle:

I have great news for readers who like an inspiring contemporary fiction story. Dan Walsh is one of my favorite writers and the first book in his Forever Home Novels, Rescuing Finley, is FREE today on Amazon. NOTE: Last Day of giveaway. 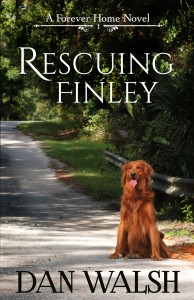 Amy Wallace was a recovering meth addict, who lost her job and needed friends. Sad to say, two “friends” had in mind some shoplifting: they wanted to steal an expensive ring from a department store’s jewellery section. And they had in mind Amy should be the one to pocket the goods. Which meant Amy was the one who got caught and sent to prison.

Ever since he finished high school Chaz wanted to sign up with the Marine Corps. His mother protested angrily when he told her, “I signed up today. It’s for two years — but they’ll go fast.” She needed him to help her survive. And what about his dog, Finley? Did Chaz expect her to look after him?

Chaz was Finley’s whole world, the one human who loved him. Chaz’s mother barely tolerated Finley in her small apartment. We understand through his eyes how abandoned and confused he was when Chaz left — and never returned. Finley couldn’t know his master’s life ended on a battlefield, but he knew something was very wrong. Lost in her own grief Chaz’s mother couldn’t deal with a dog — especially a huge one like Finley. Feeling guilty but desperate, she dropped him off at an animal shelter.

Chris Seger’s life as he knew it also ended while on a mission in Afghanistan, when he stepped on a land mine. A permanent ticket home — minus one leg. Stateside, after months of therapy, he found work with an understanding and flexible employer, but he wrestled constantly with PTSD, depression and the nightmares. Then a pal suggested he look into this new program: service dogs for the disabled.

Dan Walsh does an excellent job of taking us through Chris, Finley, and Amy’s lives as they struggle to start again. Then he brings them together in a winning story of forgiveness and healing. At the same time he walks readers through a great program where prisoners work with dogs, training them as companions for veterans with PTSD.

I found this a terrific, heart-touching book and shed quite a few tears as I watched the story unfold. Five stars from me.

Word of the Day Challenge this morning: LISTLESS
A thought formed in my mind and has come out as a haiku.

One of the biggest challenges is writing any poetry, and especially haiku and senryu, is to know how much to say and how much to leave for the reader to imagine. I’d like to hear what this verse says to you.

the old dog listless
his master away —
how can he know

Bugle Boy, a clever bloodhound pup, was put through the TSA Canine Training Center in San Antonio, TX, and graduated at the top of his class. He became part of the TSA airport security team, able to sniff out a many different narcotic and explosive substances on a baggage carousel.

However, Bugle Boy was not trained to distinguish between average citizens and politicians. So when he saw a man trying to slip past the security screening, Bugle Boy howled about it. And further, he notified his handler about an illegal drug he was sniffing in the man’s pants’ pocket. The fellow turned out to be a Republican congressman; he was outraged and demanded the handler be fired and the dog euthanized.

A higher-ranking security officer was called to deal with the complaint. Alas for the congressman, the officer was not only a stickler for the law, but a Democrat to boot. When he insisted on a strip search, the Republican congressman pulled a baggie of marijuana from his pocket and tossed it at him.

This was apparently legal, but not apt to be well tolerated should this revelation come to the ears of his rather conservative Idaho voters. Charges and counter-charges were quietly dropped. The politician did insist the hound be fired, but Bugle Boy was officially a Federal Civil Service employee and you can’t fire a civil servant without a public hearing — which was apt to adversely affect the senator’s popularity at the polls. So Bugle Boy found himself part of a package deal — a new SUV being the other part — shipped off to a tiny Pennsylvania town with a three-person police force.

Here he was partnered with Duane, a local cop who perhaps wasn’t the brightest bulb in the chandelier, but did well at catching speeders. Bugle Boy’s bored after the excitement of a busy airport but when they get called to a shooting of sorts he finally gets his chance to sniff out some local excitement. Which gives the police chief some anxious moments in his campaign for re-election.

I enjoyed this story, a rather short one as novels go — Amazon says 42 pages. I liked the small-town setting and gentle spoof on local characters, politics and politicians. It was never uproariously funny, more like chuckles all through. The language is mild for the most part; there are a few expletives, off-color jokes and insinuations.

I got this e-book for free with the idea that I should write an honest review. If you’re interested in reading it, right now this first-in-the-series book is free on both Amazon and Kobo.

This book review is my response to the Ragtag Daily Prompt word: SPOOF

Caesar and the Sub

As usual, George didn’t bother with the buzzer at the main entrance, but walked around the corner of the apartment building to knock at the patio door of his grandson’s ground-floor suite. When he arrived he saw a huge dog staring at him through the glass. The great-whatever-it-was immediately announced his presence with resounding woofs.

Damien rushed to unlock the door. “Hey, Grandpa! Good to see you. Quiet, Caesar. This is a friend. FRIEND,” he repeated.

“I sure wouldn’t want to be a burglar trying to get in here with that brute waiting to devour me!” George stepped through the window into the living room area. “So this is your new hound?”

“Yeah, this is Caesar.” Damien ruffled the fur on the dog’s head. “Had him two weeks now and so far we’re getting along great. Really, his bark is worse than his bite.”

George chuckled. “I wouldn’t want to put that to the test. I won’t ever try sneaking in to surprise you.” He cautiously held out his hand to the dog and let Caesar sniff it. “Who sold you this beast?”

“A breeder south of town. His Great Dane had a litter, but some of the pups weren’t the purebreds he was expecting. Some other genetics got added to the mix at some point. He was rather dismayed about that, but gave me a good deal on this pup.”

“Yeah, I can see this isn’t a purebred anything.”

“I don’t care. I can tell already Caesar is going to be a faithful friend. When I take him for a walk, nobody’s going to hassle me. Anyway, Grandpa, sit down.”

George took a seat on the sofa and Caesar, with a happy grin, sat on the floor beside him. George reached out and gave the dog a cautious pat on the head. “So you’re going to trust me, are you, fella?”

Damien walked into the kitchen area and came back with a plate overflowing with a humongous submarine sandwich. “I was feeling hungry after our run through the park, so I was just fixing myself a sub. Do you want me to fix you one, too?”

“Sure,” George replied. “But make mine half that size. I don’t run through the park — or anywhere else — anymore.”

Damien grinned as he set his plate on the end table beside the recliner. “Yeah, I guess this would be pretty big for a lot of people. Ham, turkey, or both?” he asked as he headed back to the counter.

“Just turkey, thanks.” George watched Caesar walk over and sit beside the end table, his eyes focused on the sub. “You’d better hurry, Damien, or you won’t have a sandwich to come back to.”

Damien turned and saw Caesar sniffing toward the sandwich. “Oh, don’t worry about him. He’s well trained.” He quickly slapped together his grandfather’s sandwich, then opened the fridge door. “Do you want a drink with this, Grandpa? Cola or ginger ale, or iced tea?”

“Ginger ale would be fine.”

“Caesar and I have been going to obedience classes. We’re learning to communicate.”

“Yeah, we’ve had four lessons already. One thing he’s learned is not to touch any food until I say, ‘Nosh, Caesar.’ Then he knows it’s for him.” Damien grabbed pulled a can of pop from the fridge and shut the door.

George, who had his eyes on the dog, was amazed how fast Caesar devoured that sandwich once he heard the magic words.

“Uh, Damien… There was a little miscommunication here. I hope you still have enough fixings for another sandwich?”

Damien whirled around and saw his empty plate. He smacked his forehead with his hand. Caesar was looking up at him with eyes full of gratitude, his tail thump thumping on the floor. “Guess I can hardly blame him. I did give the command.”

George laughed. “It looks like he learned his lesson well. And now you have, too.”

“Yeah, I’ll remember this one,” Damien said ruefully as he reached for another sub bun.