from comments by Alan Summers,
compiled by Christine Goodnough

Most people who know about haiku think of masters like Basho and his famous poem about the frog jumping into the pond. Or the tender-hearted, melancholic Issa who knew so much sorrow in his life. Haiku master Alan Summers, who has spent decades studying this form of poetry, offers the following background for this style of poetry.

Are haiku verses all about nature?

Pre-haiku, as written by Basho et al, were seasonal poems, more than being nature poems. They might be about a human society celebration, the coming of age of boys, children, or Matsuri, which are holidays, religious days or farming events.

When haiku came about, in the 1890s, it was caught in the old medieval mindset, but on the edge of the 20th century, when trains and factories were starting to be built. So I think of haiku, which really came into its own just before WWII and post-WWII, reflecting the industrial revolution and huge changes in human society.

The intimate relationship with the seasons, coming from the pre-Industrial Revolution era when people were super-aware of the slightest shift into the next part of a season, meant that folks would write little postcards with a seasonal reference. Sometimes this was just a note or a hello, and not always poetry. But when haikai poetry came about, the common and popular and normal practice of mentioning the change in a season in conversation, gossip, or greeting cards, also became part of the tiny haikai poems.

In the shift toward haiku, just before the 20th century, writers often used the seasonal ‘mention’ although post-WWII when the industrial revolution morphed into the various technological leaps in warfare and general manufacture, different topics would be added. Of course, as they moved into computer technology and robotics, these would be naturally added.

So nature, or natural history, is often part of a haikai verse in some aspect, but this is only part of the body of haikai poetry.

When Shiki did his reformation of haiku and tanka, little changed for a decade or two, then those society-changing world wars we seem to love for some reason, shifted haiku into its own genre, away from the chains of the medieval hokku and earlier haikai verses penned by Basho et al.

Haiku has been known in the West almost as long as in Japan, interestingly enough. The French were the very earliest to pen haiku very early on in the 20th Century.

This was another verse from the big group poem collaboration called Renga, which spawned both hokku (similar to haiku) and the verse named after its most successful propagator.

Senryu was the nickname or pen-name of a poet who was famous for this particular style of verse in the group poetry writing activity called renga, and later, under Basho, the increasingly popular renku. Both renga and renku are the most complicated and intricate poems in the world, with more rules than you could shake a stick at!

Senryu verses were sometimes written to mock the growing haiku writers and, before haiku came about, the various haikai verse writers who wrote hokku.

A good test of what makes the verse a senryu: CLICK HERE.

For more reading, check out these articles & free books:

To learn more about the various forms of Japanese poetry, check out Call of the Page

Why haiku is different and Basho never wrote them in English: Click Here

More than one fold in the paper: Kire, kigo, and the vertical axis of meaning in haiku: Click Here

Free eBook:
Senryū: An Application to be a) human
by Alan Summers

There are also a number of online haiku journals where you can find great examples of Japanese poetry:
Troutswirl, cattails, The Heron’s Nest, Wales Haiku Journal, etc.

Seasons of Gold selected haiku & senryu, is now live on Amazon and I’m “over the moon.” Inserting the images has given me grief galore, but I’ve just viewed a copy on our tablet — and it looks great. Now to tell the world, “My e-book is ready for you!” A great way to celebrate National Poetry Month.
Check it out here: Link to Amazon.com 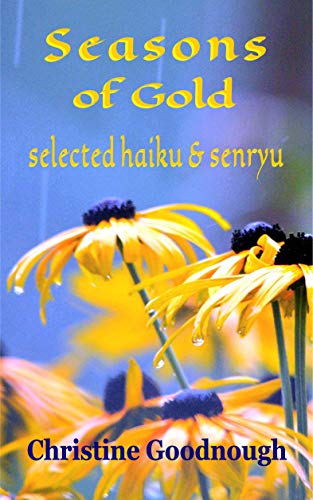